Take this Li River cruise from Guilin to Yangshuo which is the highlight of any trip to northeastern Guangxi Province. Gorgeous Karst peaks give you a surprise at every bend of the limpid river under the blue sky. Water buffaloes sprawl in the fields, peasants reap rice paddies, and school kids and fishermen float by on bamboo rafts. With its breathtaking scenery, life on the river is a taste of a life far from the bustling metropolis. Your day will begin with a pickup at 8:00 in the morning from your hotel in Guilin. From here, you will travel to Zhujiang pier, where you will board the cruise boat. The cruise lasts approximately 4 hours (from 9:30am to 13:30pm). During this time you will enjoy stunning scenery of the Li River.

Yangdi Village is located on the west bank of the Li River, about 50km (31 miles) from Guilin, and 40km (25 miles) north of Yangshuo County. Behind the village lies a hill consisting of twin peaks, which look like two sheep hoofs hanging upside down. Hence the village gets its name Yangdi, which has a harmonic tone with 'Yangti', the Chinese expression for 'sheep hoofs'.

Mural Hill(Jiuma Mountain), also known as Nine Horses Fresco Hill, is an attraction you can never miss if you visit Li River. It is located on the west bank of Li River, about 60 km (37 miles) from Guilin and close to Xingping Town. Facing the broad and peaceful watercourse is a large and steep stone cliff which looks like a huge painted screen. Backed by mountains and consisting of five peaks, Mural Hill is an assemblage of weathered rocks in yellow, white, black, grey and green colors. Looking from a distance the mottled cliff face resembles a huge piece of mural with images of nine horses in various poses.

Once, in ancient times, Xingping Town was the largest town along the Li River, and is 63 km (39 miles) from Guilin and 25 km (15.5 miles) from Yangshuo, on the east bank of the river. The town is really a beautiful place, surrounded by enthralling scenery. Both Mural Hill and Yellow Cloth Shoal belong to this scenic area.

Lying on the east bank of the Li River upstream from Yangshuo, the fishing village has a history dating back more than 500 years. Founded during the Ming Dynasty in 1506, this picturesque village is infused with typical Lingnan or southeastern Chinese provincial culture. There are 48 traditional residences that have been remarkably well preserved throughout the years. Special features of these residences include blue brickwork, black tiles, sloping roofs, horse head walls, cornices and carved windows. The houses are classic examples of Ming (1368-1644) and Qing (1644-1911) dynastic architecture.

After the river cruise, we will visit the Yangshuo West street for 30 minutes. West Street is the oldest street in Yangshuo with a history of more than 1,400 years. Situated at the center of Yangshuo County, the street has become, since the 1980's, a window of eastern and western culture and the biggest 'foreign language center' in China. It is the most prosperous district in Yangshuo, and, each year, approximately 100,000 foreigners come here on their travels or to attend advanced studies. Visitors are attracted to West Street by its unique mix of cultures. The West Street is 517 meters (1,696 feet) long and 8 meters (26 feet) wide, meandering in an 'S' along its length. Being completely paved with marble it is a typical example of a southern China street. It is greatly admired by foreigners for its simple style and courtyard-like setting. There is a saying about it that 'half is village while the other half is stores'.

Yangshuo Park is located in Yangshuo, covering an area of 230 thousand sq m (271 thousand sq yd). The park has both a big and a small gates. They are carved with the park’s name in Chinese by famous calligraphers. There are plenty of osmanthus trees and bamboos in the park, providing a peaceful and secluded environment for visitors. Double Moon Stream runs through the park and the park is surrounded by marvelous mountains. Many locals do exercise and play Chinese chess in the park.

After the West street, we will head to the XIanggong hill and need 40 mins driving and 450 Steps to reach the top of the hill. In the beginning, Xianggong Mountain was merely an obscure small karst hill on the west bank of Li River in Yangshuo County of Guilin. A few years ago, a local photographer took some pictures on the top of this mountain and won the bronze prize in an international photography contest, making Xianggong Mountain famous overnight. From then on, it became a popular tourist destination beloved by enthusiastic photographers.

We pick up from any hotel in Guilin or Yangshuo 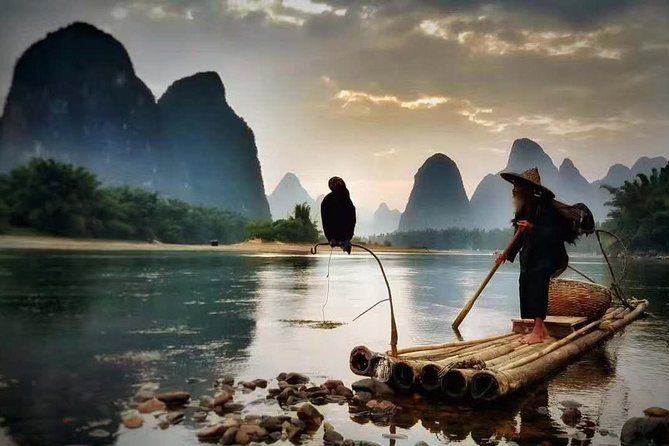 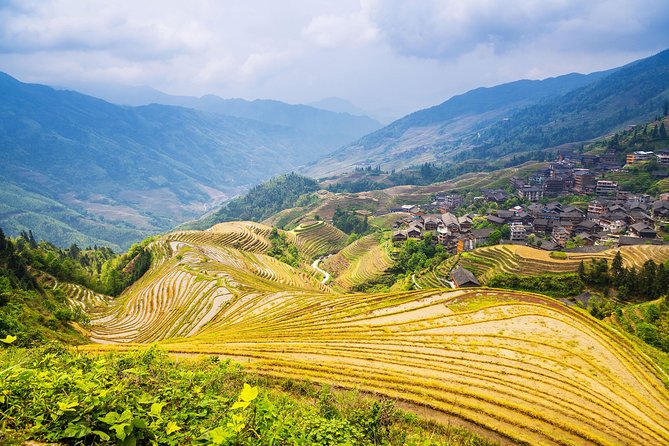 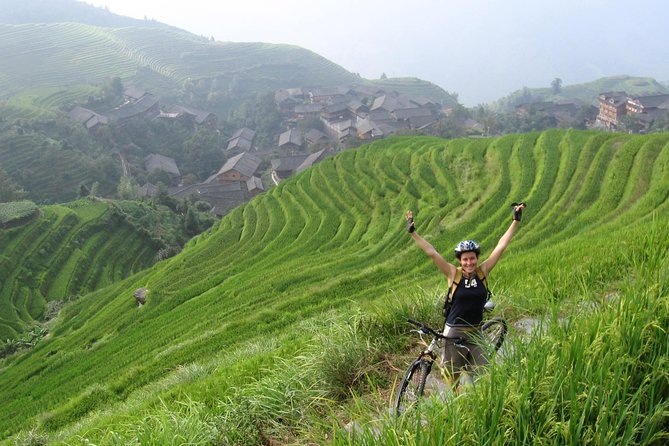 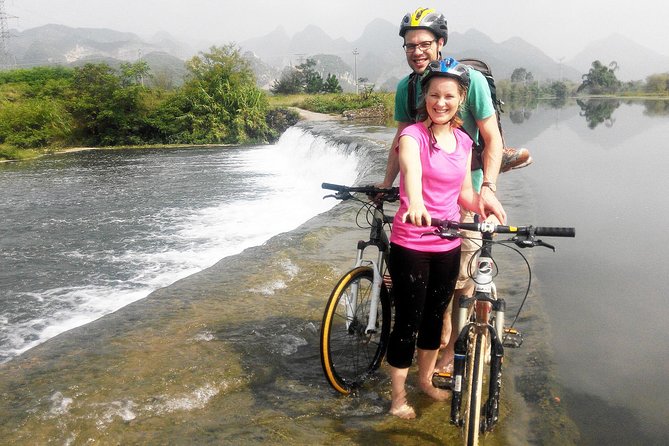 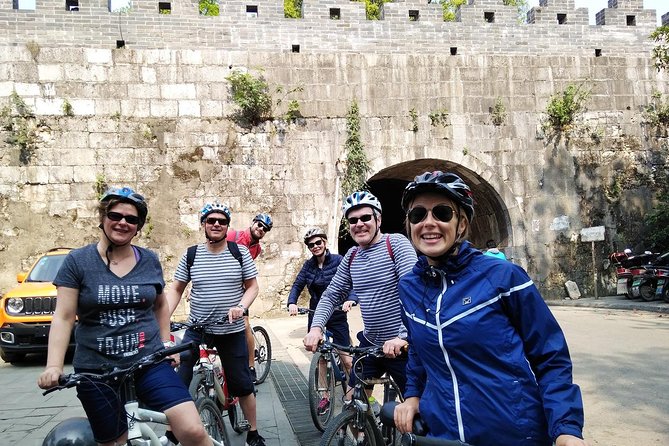 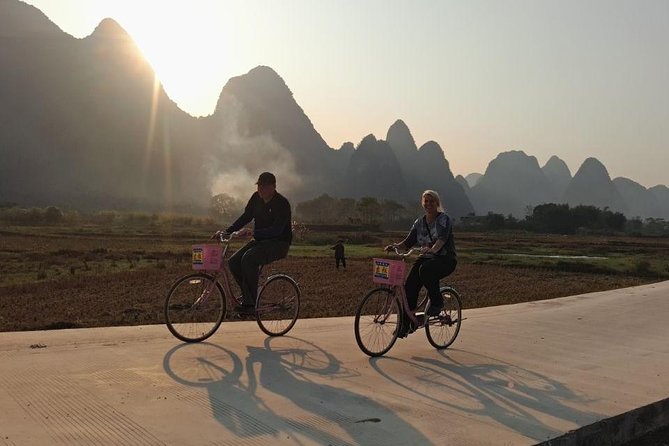 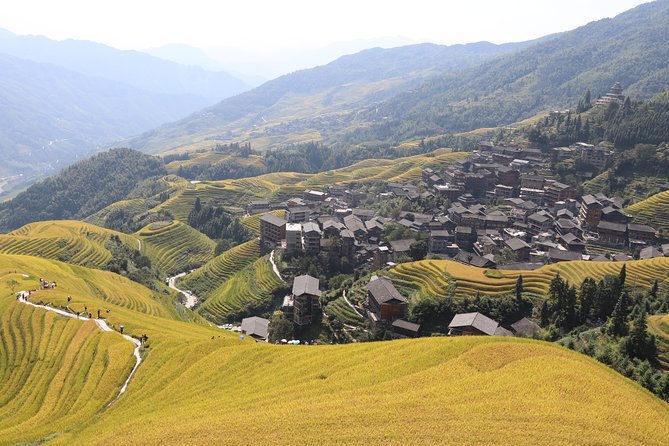 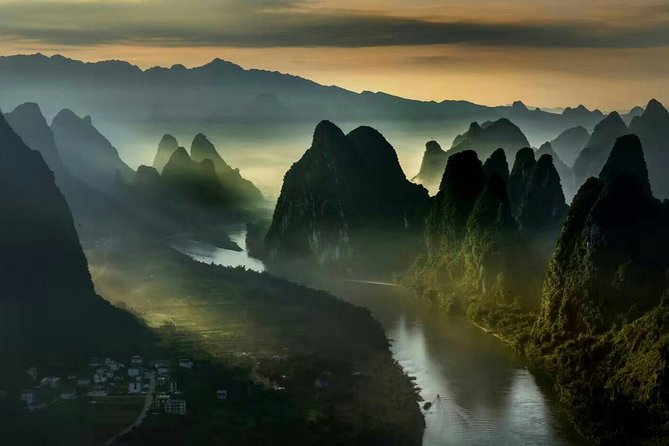